How can countries better use evidence to inform their HIV response for key populations? 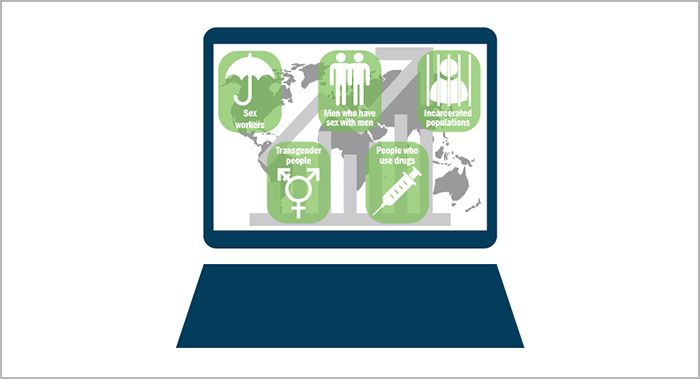 It is widely acknowledged that there are key populations—sex workers, gay men and other men who have sex with men, transgender people, incarcerated populations, and people who use drugs—who are at high risk of acquiring and transmitting HIV. Yet, in many countries, particularly those with generalized epidemics, policymakers have a limited understanding of the dynamics of HIV transmission among these groups and the larger population, and their prevention and treatment needs. Moreover, efforts to address the needs of  key populations have been hindered by a lack of high-quality data on the epidemiology of HIV transmission and prevention, and by limited efforts to incorporate existing data on key populations into country plans.

Project SOAR is working with the Global Fund to Fight AIDS, Tuberculosis and Malaria; U. S. President’s Emergency Plan for AIDS Relief; and in-country stakeholders to address these gaps in data access and availability.

Project SOAR is using a multi-pronged approach to better equip countries to collect, interpret, and use data on key populations to inform evidence-based HIV interventions. Key components of the strategy are synthesizing and making data on key populations widely available, and strengthening the capacity of stakeholders to understand their data needs and address gaps.

SOAR is creating a repository of data from both the peer-reviewed and grey literature on key populations, including data on HIV prevalence and incidence, antiretroviral treatment access and retention, and population size estimates. For each dataset, the team is noting its geographic scope, population focus, when the data were collected, and whether the data were peer reviewed. The team is also assessing the quality of the data—using a specific tool that considers the study’s design, implementation, and study-specific characteristics. The data are searchable by a range of criteria, including by country, population, and timeframe of data collection or publication.

In Malawi, for example, the team identified 10 sources of data of varying quality in the peer-reviewed literature on men who have sex with men, including HIV prevalence, HIV care continuum data, and the estimated size of the population within the country. But there were also important data gaps; the team could not find data on HIV incidence among men who have sex with men, nor any HIV data on people who use drugs and incarcerated populations in the country. This review was used at a stakeholder capacity strengthening workshop in Malawi to assess available key population data and set priorities for further HIV-related data collection in the country. 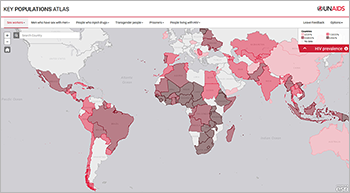 The data repository is intended to be accessible, sustainable, and publicly available through a partnership with UNAIDS, linking to their online platform, the Key Populations Atlas. This interactive tool will provide access to data on key populations for over 150 countries, with country-specific dashboards on key indicators and data visualizations on HIV prevalence and incidence, and on the treatment cascade. This tool will also encourage community engagement with data by inviting users to create and share story maps on the platform, made with the available data in the Key Populations Atlas.

While the online platform is being developed, individuals can make a customized data request using this form.

For its World AIDS Day report, UNAIDS requested worldwide data from the repository on HIV testing coverage and linkage to care rates among all key populations, with the aim of taking steps to reach the people around the world who live with HIV, but do not know their status.

SOAR has also convened a series of workshops in a variety of countries that focus on reviewing country-level data and building skills around assessing and meeting data needs. Each workshop has engaged from 25 to more than 40 participants, representing government, community groups, research institutions, donors, and implementing partners.

A recent workshop in South Africa, for example, focused on improving mathematical modeling. Participants reviewed different types of mathematical models that aim to characterize the country’s HIV epidemic and considered challenges in interpreting these models. They also learned how models can be used to justify policies by showing their impact on the HIV epidemic, or to demonstrate the negative consequences of leaving key populations behind in achieving treatment targets. 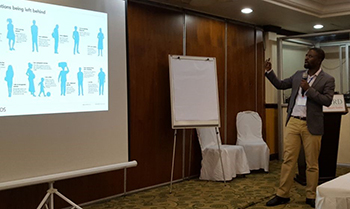 In Malawi, participants practiced using the data quality assessment tool to evaluate the evidence on key populations. They also learned about new methods and tools that leverage existing data to estimate the size of key populations. Additionally, they brainstormed major epidemiological data gaps and came to consensus on the most important ones to close. Their priorities included standardizing data on the HIV prevention and treatment cascade; estimating the population sizes of various sub-groups of men who have sex with men; and conducting formative research on transgender populations, male sex workers, and people who use drugs.

And in Malawi, the SOAR team has continued collaborating with stakeholders since the initial workshop by providing ongoing technical assistance to improve their key population research capacity.

The project has been successful in equipping stakeholders to better engage with data–the first step in tailoring the epidemic response to meet the needs of populations most at risk for HIV acquisition and transmission.