Effectiveness of a Pediatric HIV Disclosure Intervention in Uganda 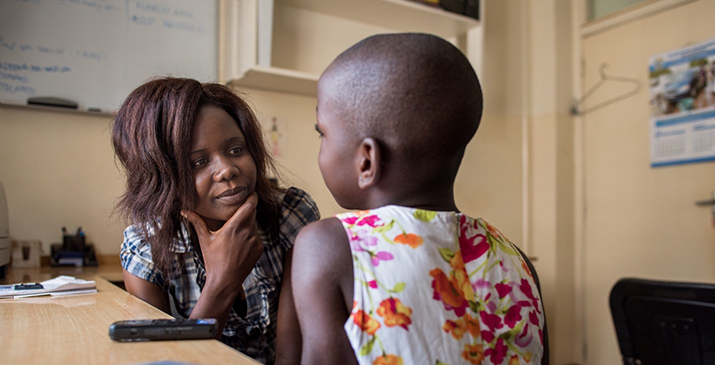 The issue
With increased availability of antiretroviral treatment and improved care, increasing numbers of HIV-positive children are surviving into adolescence. A growing challenge facing parents, caregivers, and health providers is disclosure of HIV infection to children living with HIV. Although disclosing to a child that he or she has HIV is an important and integral part of providing comprehensive HIV medical care, studies conducted in sub-Saharan Africa have indicated that only 2–38 percent of HIV-positive children younger than 15 years know their HIV status.

Our approach
Project SOAR provided support to a Eunice Kennedy Shriver National Institute of Child Health and Human Development-funded study to assess the effectiveness of a cognitive-behavioral intervention to increase disclosure of children’s HIV diagnosis by parents/caregivers to their HIV-positive children ages 7–12 years old. The intervention, called DISCO-Kids (Dialogue Intervention to Support Communication and Openness), included caregiver group sessions, individualized counseling sessions for caretakers and their children, and booster sessions to reinforce learning. The study was a clinic-stratified, randomized controlled trial involving six Kampala-area HIV clinics and a total of 300 caregiver-child pairs who were followed at 6-month intervals for up to 18 months post-intervention.

The impact
Findings showed that caregivers enrolled in the DISCO-Kids intervention arm were much more likely to disclose to their child by the 6-month study visit compared to those in the control arm. In multivariate analyses, in addition to the strong intervention effect, greater caregiver disclosure self-efficacy at baseline was independently associated with full and accurate disclosure by six months. Caregiver age, education level, HIV status, relationship to the child (e.g., mother vs. other), age of child, sex of child, and child antiretroviral drug use were not associated with full and accurate HIV disclosure by six months after enrollment. The DISCO-Kids intervention was found to be highly acceptable to caregivers.