The voluntary medical male circumcision (VMMC) program in Mozambique aimed to increase male circumcision (MC) coverage to 80 percent among males ages 10 to 49 by 2018. Given the difficulty in attracting adult men over age 20 for circumcision, Mozambique became interested in assessing its age-targeting strategy and progress at the provincial level to inform program planning.

Methods
We examined the impact and cost-effectiveness of circumcising different age groups of men using the Decision Makers’ Program Planning Toolkit, Version 2.1 (DMPPT 2). We also applied the model to assess the scale-up efforts through the end of September 2017 and project their impact on HIV incidence through 2030. The DMPPT 2 is a compartmental Excel-based model that analyzes the effects of age at circumcision on program impact and cost-effectiveness. The model tracks changes in age-specific MC coverage due to VMMC program circumcisions. Baseline MC prevalence was based on data from the 2011 Demographic and Health Survey. The DMPPT 2 was populated with HIV incidence projections from Spectrum/Goals under an assumption that Mozambique would reach its national targets for HIV treatment and prevention by 2022.

Conclusion
The VMMC program in Mozambique has made great strides in increasing MC coverage, particularly for males ages 10 to 29. Scaling up and maintaining MC coverage in this age group offers an attainable and cost-effective target for VMMC in Mozambique.
Go to article on the PLOS ONE website 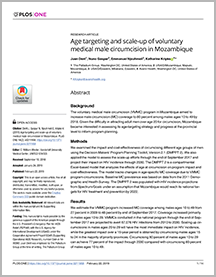