Introduction
Mortality associated with in-utero HIV infection rises rapidly within weeks after birth. Very early infant diagnosis of HIV (VEID)—testing within 2 weeks of birth—followed by immediate initiation of antiretroviral therapy has potential to avert mortality associated with in-utero transmission. However, our understanding of acceptability and feasibility of VEID is limited.

Methods
VEID was piloted in an observational prospective cohort of HIV-positive pregnant women and their infants in 13 Lesotho health facilities. Between March-July 2016, semi-structured interviews were conducted with HIV-positive women attending 6-week or 14-week postnatal visits and health workers (HWs) in 8 study facilities in 3 districts as well as with district and central laboratory staff. Interview themes included acceptability of birth and subsequent HIV testing and early treatment, perceived VEID challenges, and HIV birth testing procedures and how well they were performed.

Conclusions
Women, HWs, and laboratory staff found VEID acceptable and were supportive of national implementation of birth testing. However, they identified challenges within the EID system that could be exacerbated by adding a test to the diagnostic algorithm, such as delays in receiving test results, suggesting VEID may not be feasible in certain settings. Policymakers will need to consider whether adding birth testing or strengthening the current clinic and laboratory system is the most appropriate course of action. 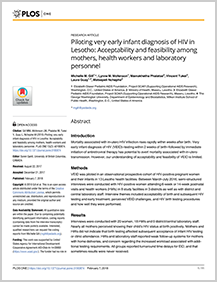