“It is always better for a man to know his HIV status” – A qualitative study exploring the context, barriers and facilitators of HIV testing among men in Nairobi, Kenya

HIV testing services are an important component of HIV program and provide an entry point for clinical care for persons newly diagnosed with HIV. Although uptake of HIV testing has increased in Kenya, men are still less likely than women to get tested and access services. There is, however, limited understanding of the context, barriers and facilitators of HIV testing among men in the country. Data are from in-depth interviews with 30 men living with HIV and 8 HIV testing counsellors that were conducted to gain insights on motivations and drivers for HIV testing among men in the city of Nairobi. Men were identified retroactively by examining clinical CD4 registers on early and late diagnosis (e.g. CD4 of <500 cells/mm, early diagnosis and <500 cells/mm, late diagnosis). Analysis involved identifying broad themes and generating descriptive codes and categories. Timing for early testing is linked with strong social support systems and agency to test, while cost of testing, choice of facility to test and weak social support systems (especially poor inter-partner relations) resulted in late testing. Minimal discussions occurred prior to testing and whenever there was dialogue it happened with partners or other close relatives. Interrelated barriers at individual, healthcare system, and interpersonal levels hindered access to testing services. Specifically, barriers to testing included perceived providers attitudes, facility location and set up, wait time/inconvenient clinic times, low perception of risk, limited HIV knowledge, stigma, discrimination and fear of having a test. High risk perception, severe illness, awareness of partner’s status, confidentiality, quality of services and supplies, flexible/extended opening hours, and pre– and post–test counselling were facilitators. Experiences between early and late testers overlapped though there were minor differences. In order to achieve the desired impact nationally and to attain the 90-90-90 targets, multiple interventions addressing both barriers and facilitators to testing are needed to increase uptake of testing and to link the positive to
care. 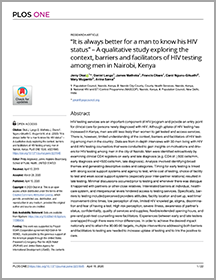