The introduction of “Treat All” (TA) has been promoted to increase the effectiveness of HIV/AIDS treatment by having patients initiate antiretroviral therapy at an earlier stage of their illness. The impact of introducing TA on the unit cost of treatment has been less clear. The following study evaluated how costs changed after Namibia’s introduction of TA in April 2017. A two-year analysis assessed the costs of antiretroviral therapy (ART) during the 12 months before TA (Phase I–April 1, 2016 to March 31, 2017) and the 12 months following (Phase II–April 1, 2017 to March 31, 2018). The analysis involved interviewing staff at ten facilities throughout Namibia, collecting data on resources utilized in the treatment of ART patients and analyzing how costs changed before and after the introduction of TA. An analysis of treatment costs indicated that the unit cost of treatment declined from USD360 per patient per year in Phase I to USD301 per patient per year in Phase II, a reduction of 16%. This decline in unit costs was driven by 3 factors: 1) shifts in antiretroviral (ARV) regimens that resulted in lower costs for drugs and consumables, 2) negotiated reductions in the cost of viral load tests and 3) declines in personnel costs. It is unlikely that the first two of these factors were significantly influenced by the introduction of TA. It is unclear if TA might have had an influence on personnel costs. The reduction in personnel costs may have either represented a positive development (fewer personnel costs associated with increased numbers of healthier patients and fewer visits required) or alternatively may reflect constraints in Namibia’s staffing. Prior to this study, it was expected that the introduction of TA would lead to a significant increase in the number of ART patients. However, there was less than a 4% increase in the number of adult patients at the 10 studied facilities. From a financial point of view, TA did not significantly increase the resources required in the ten sampled facilities, either by raising unit costs or significantly increasing the number of ART patients. 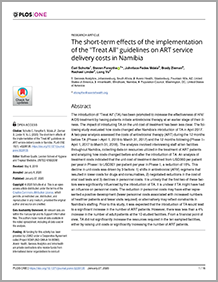