What are we learning about HIV testing in informal settlements in KwaZulu-Natal, South Africa? Results from a randomized controlled trial

Background
Recent evidence highlighting high HIV incidence and prevalence in informal settlements suggests that they are environments that foster HIV risk. Given growing urbanization in sub-Saharan Africa, there is a critical need to assess the successes and challenges of implementing HIV testing, prevention and treatment interventions in these contexts.

Methods
We randomly selected a household-based sample of 1528 adult men (18–35) and women (18–24) living in 18 randomly selected communities in KZN, South Africa. After the baseline interview, communities were randomized to one of three intervention rollout arms in a stepped wedge design. At approximately 8-month intervals, the Asibonisane Community Responses Program (and in particular the implementation of Stepping Stones, a participatory HIV prevention program focused on strengthening relationships and communication) was rolled at by intervention phase. Using data from this evaluation, we describe levels and trends in HIV testing and treatment during follow-up, and we use fixed effects models to estimate the effects of participation in the program on testing.

Results
Study respondents reported high levels of economic insecurity and mobility, and men report various HIV risk behaviors including about 50% reporting multiple partnerships. About two-thirds of respondents (73% of women, 63% of men) had been tested for HIV in the last six months. Among those living with HIV, treatment levels were high at baseline, and almost universal by endline in 2019. Program participation led to a 17% increase in the probability of testing for women (p<0.05) but had no effect on testing for men due, in part, to the fact that the program did not reach men who were least likely to be tested, including those who had migrated recently, and those who had never been tested at baseline.

Conclusions
Near universal HIV treatment use demonstrates positive trends in access to some HIV services (including treatment as prevention) in these communities. Stepping Stones had positive effects on HIV testing for women, yet barriers to HIV testing remain, especially for men. Redoubled efforts to reach men with testing are vital for improving HIV outcomes for both men and their partners. 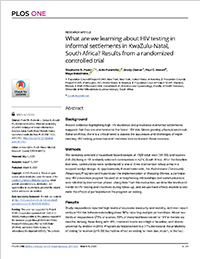