Background
There has been a heightened emphasis on prioritizing data to inform evidence-based HIV responses, including data focused on both defining the content and scale of HIV programs in response to evidence-based need. Consequently, population size estimation (PSE) studies for key populations have become increasingly common to define the necessary scale of specific programs for key populations. This study aims to assess the research utilization of these size estimates in informing HIV policy and program documents across the African continent.

This study included two phases; Phase 1 was a review of all PSE for key populations, including men who have sex with men (MSM), female sex workers (FSW), people who use drugs (PWUD), and transgender persons in the 54 countries across Africa published from January 2009—December 2017. Phase 2 was a review of 23 different types of documents released between January 2009 –January 2019, with a focus on the US President’s Emergency Plan for AIDS Relief (PEPFAR) and The Global Fund to Fight AIDS, Tuberculosis and Malaria investments, for evidence of stakeholder engagement in PSE studies, as well as key population PSE research utilization to inform HIV programming and international HIV investments.

The past decade has seen an increase in PSE studies conducted for key populations in more generalized HIV epidemic settings which involve significant investments of finances and human resources. However, there remains limited evidence of sustained uptake of these data to guide the HIV responses. Increasing uptake necessitates effective stakeholder engagement and data-oriented capacity building to optimize research utilization and facilitate data-driven and human rights-affirming HIV responses.
Go to article on the PLOS website 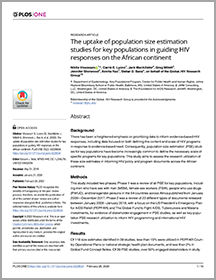