Since its inception, Project SOAR has conducted 70 activities in 21 countries. This supplement features findings from select activities that cover all three pillars of the project: research, research utilization, and capacity strengthening.

The papers are organized by the following topics: linkage to care, factors that affect the HIV care cascade, methodologies to improve implementation science research and HIV programming, and ensuring that research makes a difference.

Editorial—Implementation science: Helping to accelerate progress toward achieving the 90–90–90 goal

HIV testing, linkage to and retention in care

Use and acceptability of HIV self-testing (HIVST) among first-time testers at risk for HIV in Senegal.

Despite the rapid scale up of ART, gaps in uptake and retention persist, particularly for female sex workers. Tun et al. assessed a community-based ART distribution program for this population on key HIV outcomes.

Re-thinking linkage to care in the era of universal test and treat: insights from implementation and behavioral science for achieving the second 90.

Successfully linking to the HIV care continuum involves a complex series of processes that extend beyond simply getting tested and referred to treatment. Herce et al. propose a new conceptual framework that reflects the nuances of linking to care.

The role of depression screening and treatment in achieving the UNAIDS 90-90-90 goals in sub-Saharan Africa.

Mental health disorders, such as depression, are pervasive among PLHIV, and can impede uptake of HIV treatment.  Kulisewa et al. assessed the feasibility and acceptability of integrating depression screening into HIV clinics in Malawi.

The People Living with HIV (PLHIV) Resilience Scale: development and validation in three countries in the context of the PLHIV Stigma Index.

Methods to measure resilience is critical, as resilience has been shown to be associated with important HIV-related treatment outcomes. Gottert et al. developed and validated a resilience scale which now forms part of the People Living with HIV Stigma Index 2.0.

Leveraging geospatial approaches to characterize the HIV prevention and treatment needs of out-of-school adolescent girls and young women in Ethiopia.

Ensuring that research makes a difference

Research capacity strengthening in sub-Saharan Africa: recognizing the importance of local partnerships in designing and disseminating HIV implementation science to reach the 90–90–90 goals.

Kalbarczyk et al. describe an implementation science capacity strengthening workshop that improved participants’ understanding of their own and their organization’s needs, and the importance of engaging local stakeholders.

Engaging stakeholders, from inception and throughout the study, is good research practice to promote use of findings.

Kalibala et al. present a research utilization model to ensure the research is locally relevant, owned, and utilized. The authors provide examples demonstrating that when stakeholders are involved in the entire process, there is impact on programs and policies.

Go to the special issue on the AIDS and Behavior website 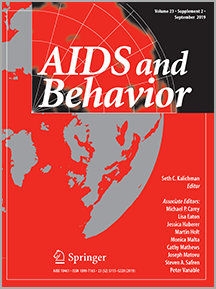