Background
In 2010, the South African Government initiated a voluntary medical male circumcision (VMMC) program as a part of the country’s HIV prevention strategy based on compelling evidence that VMMC reduces men’s risk of becoming HIV infected by approximately 60%. A previous VMMC costing study at Government and PEPFAR-supported facilities noted that the lack of sufficient data from the private sector represented a gap in knowledge concerning the overall cost of scaling up VMMC services. This study, conducted in mid-2016, focused on surgical circumcision and aims to address this limitation.

Methods
VMMC service delivery cost data were collected at 13 private facilities in three provinces in South Africa: Gauteng, KwaZulu-Natal, and Mpumalanga. Unit costs were calculated using a bottom-up approach by cost components, and then disaggregated by facility type and urbanization level. VMMC demand creation, and higher-level management and program support costs were not collected. The unit cost of VMMC service delivery at private facilities in South Africa was calculated as a weighted average of the unit costs at the 13 facilities.

Key findings
At the average annual exchange rate of R10.83 = $1, the unit cost including training and cost of continuous quality improvement (CQI) to provide VMMC at private facilities was $137. The largest cost components were consumables (40%) and direct labor (35%). Eleven out of the 13 surveyed private sector facilities were fixed sites (with a unit cost of $142), while one was a fixed site with outreach services (with a unit cost of $156), and the last one provided services at a combination of fixed, outreach and mobile sites (with a unit cost per circumcision performed of $123). The unit cost was not substantially different based on the level of urbanization: $141, $129, and $143 at urban, peri-urban, and rural facilities, respectively.

Conclusions
The private sector VMMC unit cost ($137) did not differ substantially from that at government and PEPFAR-supported facilities ($132 based on results from a similar study conducted in 2014 in South Africa at 33 sites across eight of the countries nine provinces). The two largest cost drivers, consumables and direct labor, were comparable across the two studies (75% in private facilities and 67% in public/PEPFAR-supported facilities). Results from this study provide VMMC unit cost data that had been missing and makes an important contribution to a better understanding of the costs of VMMC service delivery, enabling VMMC programs to make informed decisions regarding funding levels and scale-up strategies for VMMC in South Africa. 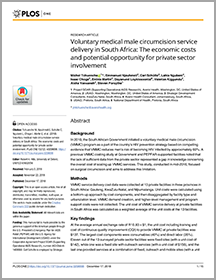